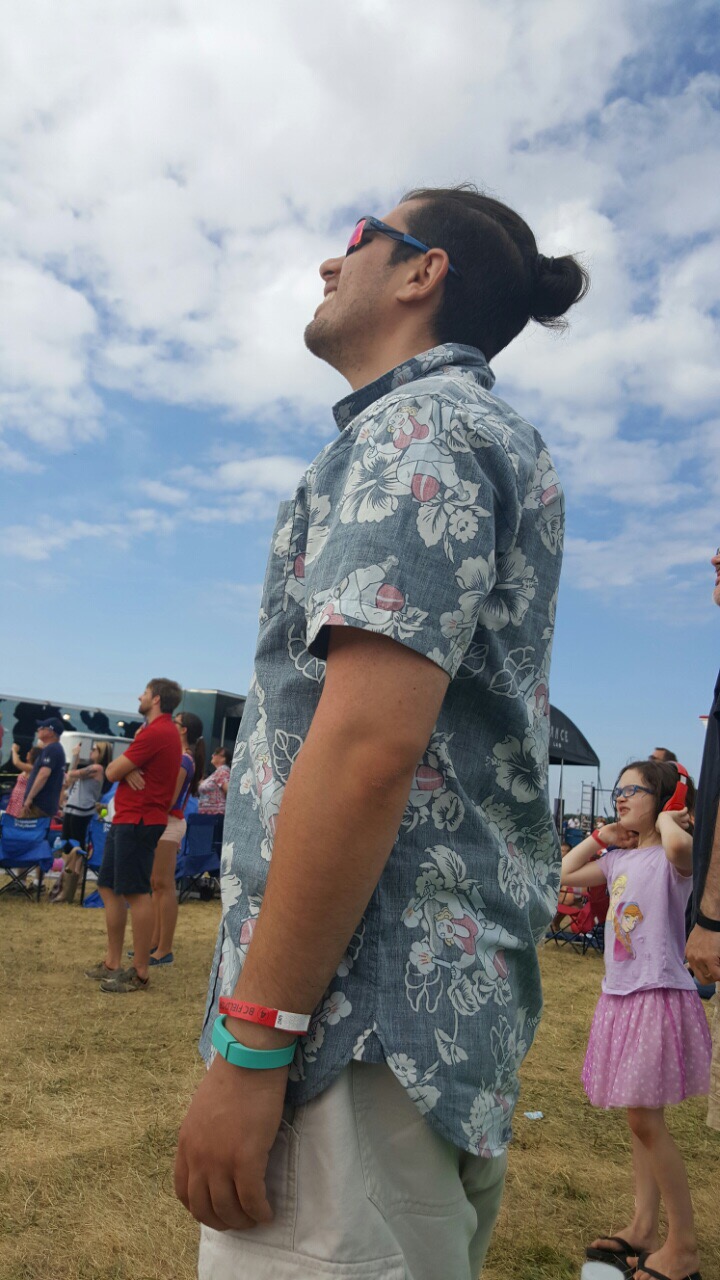 This blog post is intended for folks who are interested in reverse engineering security patches, but don’t have access to expensive tools such as IDA Pro to perform such tasks. First off, we will create a program that introduces a common bug class such as buffer overflow and then patch said bug. Once done, we will use BinExport for Ghidra to export both versions of the program and then use BinDiff to analyze the patch. By the end of this blog post, you should be somewhat comfortable investigating patches using BinDiff.

We will be using the following tools:

The following is C program that is vulnerable to buffer overflow due to the use of unsafe gets function. I’m going to assume the reader is already familiar with C programming and buffer overflows, if not then Google is your friend.

The programmer here (well technically me ;D) is making an assumption that the user already knows the password should be no longer than 13 characters and as such char buf[14] null-terminated array is used to store the password. Let’s confirm the program work as expected.

As we can see above the program works and we were able to corrupt the stack by providing 14 character password.

I’m by no means a good programmer, but I believe replacing gets with fgets should mitigate the issue. Let me know if there is a more elegant way to fix it.

After applying the fix we no longer get the debug error message when entering passwords with more than 13 character.

At this point, we will follow the instructions outlined here to set up BinExport for Ghidra inside our Kali Linux VM. First and foremost, we make sure we have all the required dependencies installed and then we build BinExport using gradle.

If all goes well you should see .zip file under dist folder.

We then install BinExport extension by loading the zip file in Ghidra under File->Install Extensions... and then verify installation. 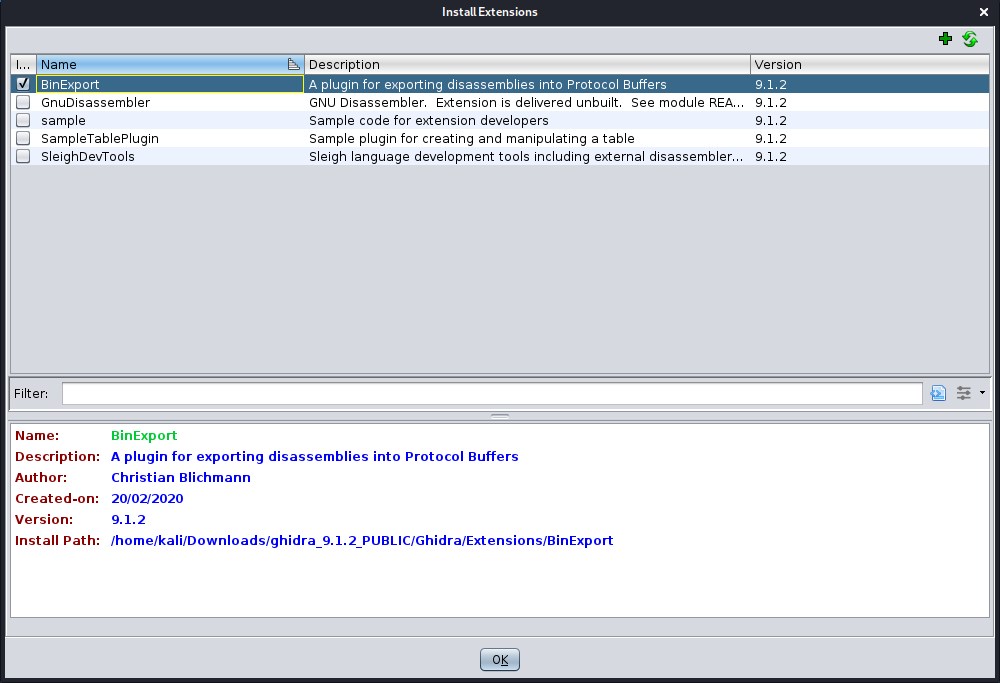 Now we should have everything we need to export to BinDiff.

Let’s load both vulnerable and patched programs into Ghidra and make sure to run them through initial analysis. I did follow the instruction mentioned here and enabled the aggressive instruction finder option to get better coverage in the export. Now we export programs using BinExport extension. 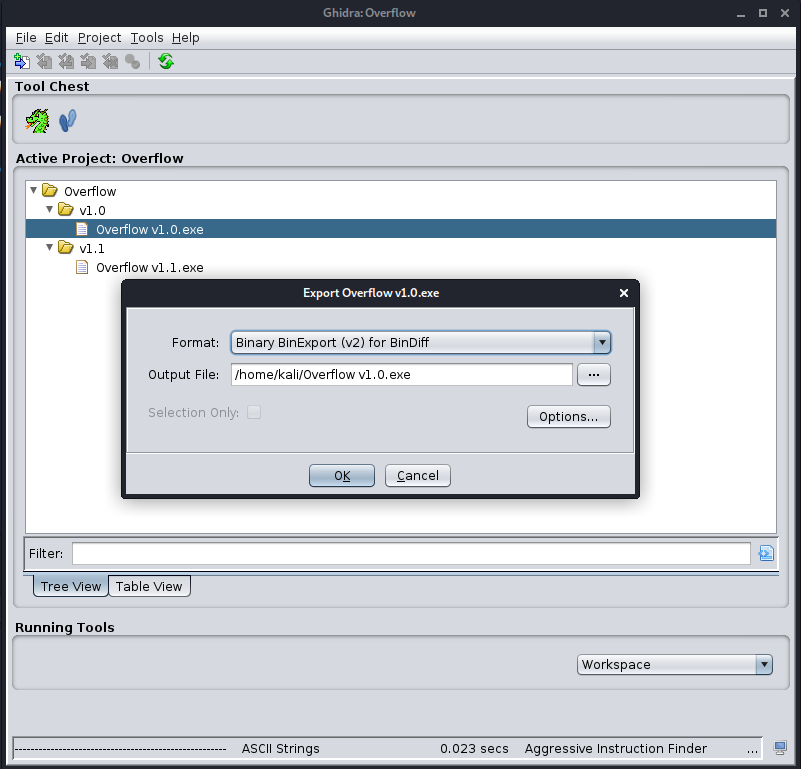 And then load them into BinDiff by creating a new workspace.

We get nice overview of both programs that show things like hashes, architecture, etc.

Next we right-click on Overflow v1.1.exe vs Overflow v1.0.exe and then hit Open Diff which create several tabs.

I will briefly summarize each tab, but feel free to check BinDiff manual here for more details:

Navigating to the Matched Functions tab, I noticed quite a few changes considering how small the patch was, however, FUN_140011840 quickly caught my attention due to the number of basic blocks compared to other functions that were changed. Please note lines are colored according to how similar the matched functions are where greener colors indicate a high similarity while red tones indicate weak matches. 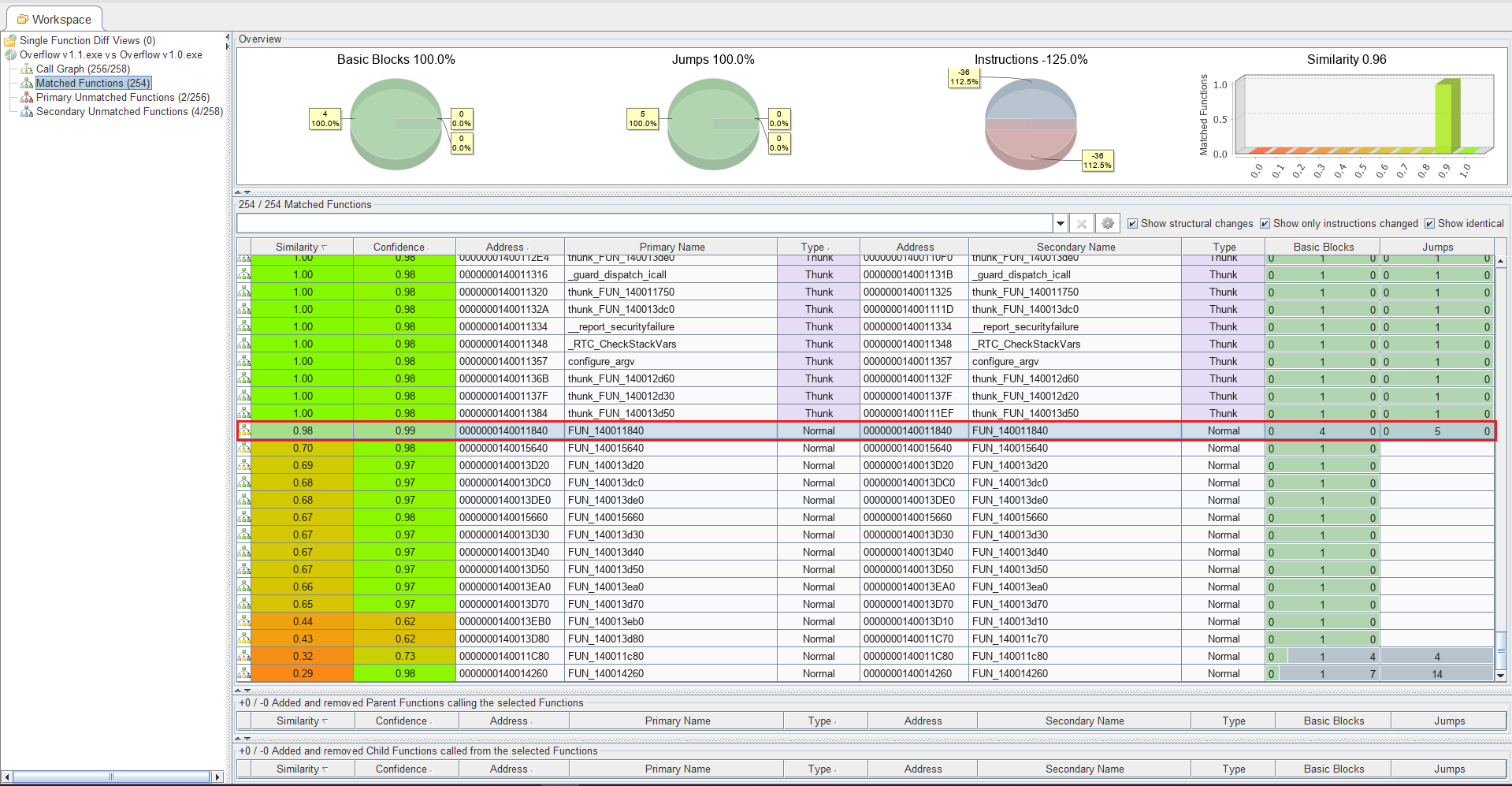 Before we continue, I would like to touch on similarity and confidence scores:

Let’s double-click on FUN_140011840 function and see if that’s where the patch was applied.

We can see from the image above this is the main function. The following are all possible colors inside this view and what each color represent:

Now before we go over the changes, here’s what fgets function looks like and where the arguments should be placed based on __fastcall calling convention: 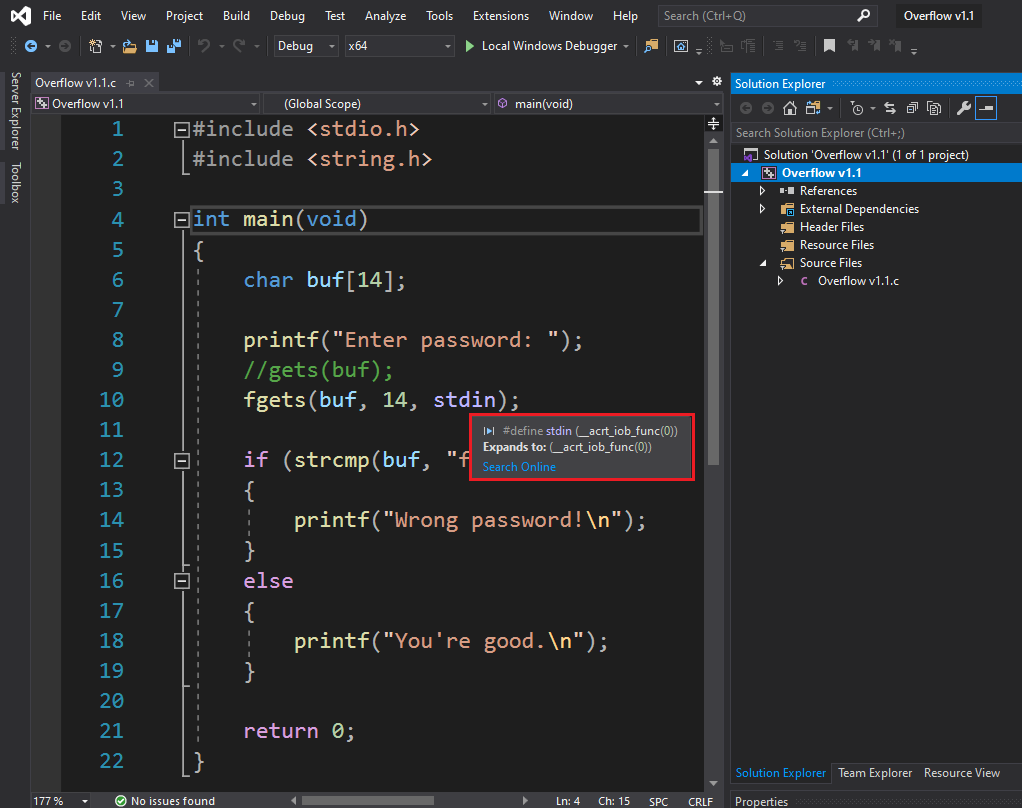 To be complete, I should mention the pointer to the buffer that will hold the data is then stored in RCX via LEA RCX, [RBP, 0x8] and ultimately a call to fgets is made which matches the patch that was put into place. At this point, you might be asking yourself what about fgets function call? Why wasn’t it marked as a change from the unpatched version? The reason CALL qword ptr[PTR_fgets_140020308] was not highlighted, and please correct me if I’m wrong, is due to no changes in the mnemonic itself rather the operand which as far as I know BinDiff does not account for.

Hopefully, this blog post has shed some light on the subject of patch diffing and I highly recommend reading through BinDiff maunal to fully understand what goes behind the scenes to produce the final changes, in fact most of what you have read was based on information taken from it. Lastly, Huge thanks to @AdmVonSchneider for making BinDiff and BinExport available and @h0mbre_ for reviewing. 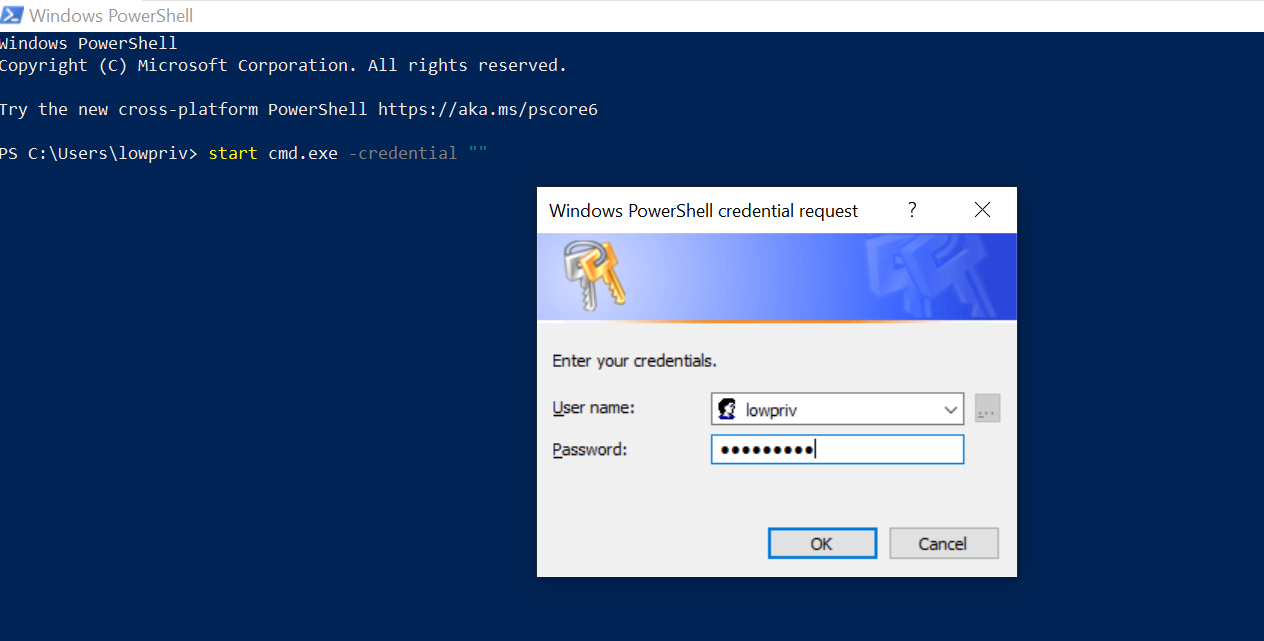 Introduction Following b33f most recent Patreon session titled RDP hooking from POC to PWN where he talks about API hooking in general and then discuss in de... 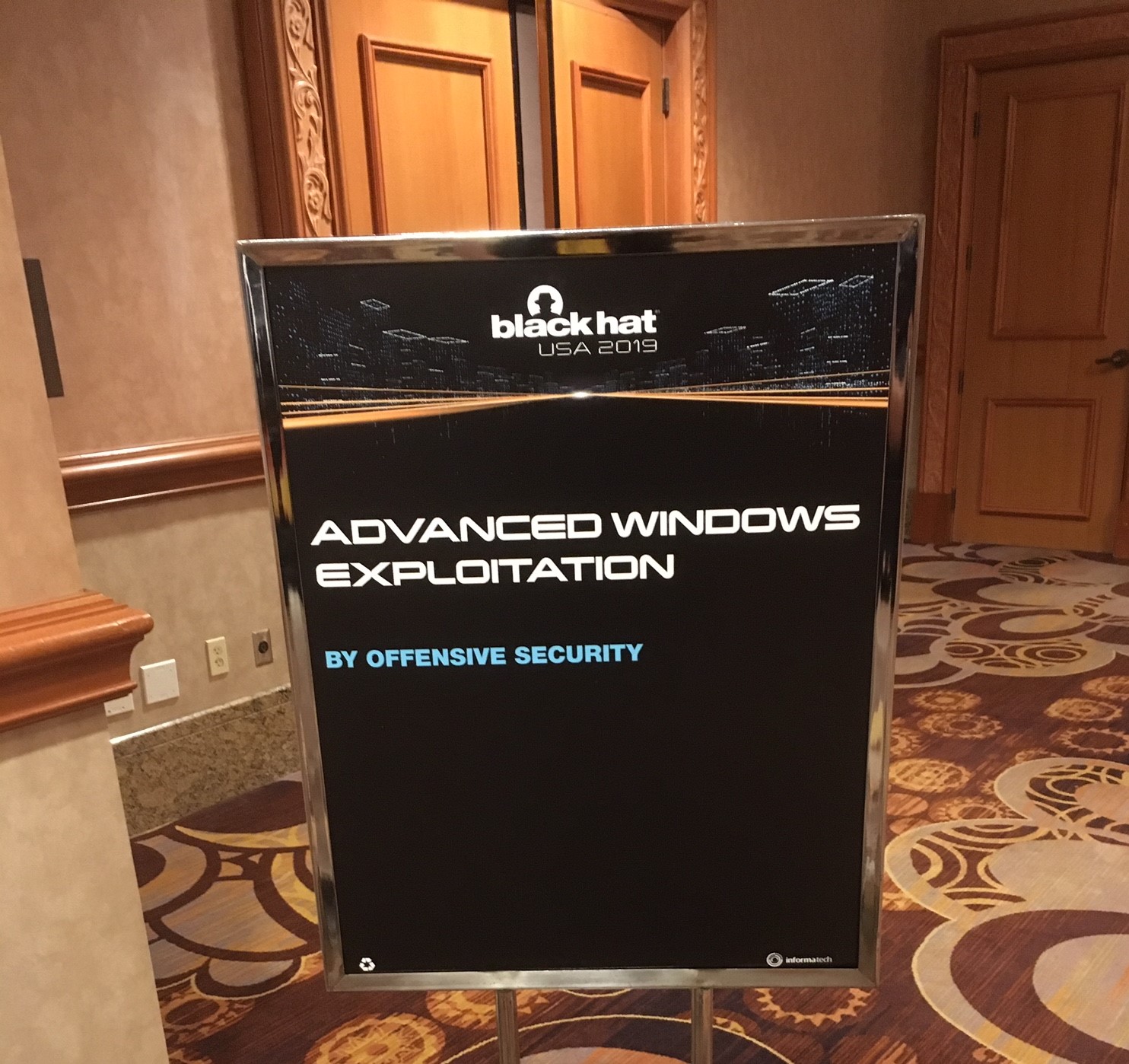 Introduction This writeup is aimed at folks who are contemplating preparing to take on the AWE course offered by OffSec at Black Hat but are not quite sure w...